Summary: Climate activists have made polar bears “the face of climate change.” This week we see how they have done so: with fake news. That they do so instead of relying on science tells us much about them — and why they have achieved so few policy changes after 30 years of these tactics.

“This is the face of climate change.” 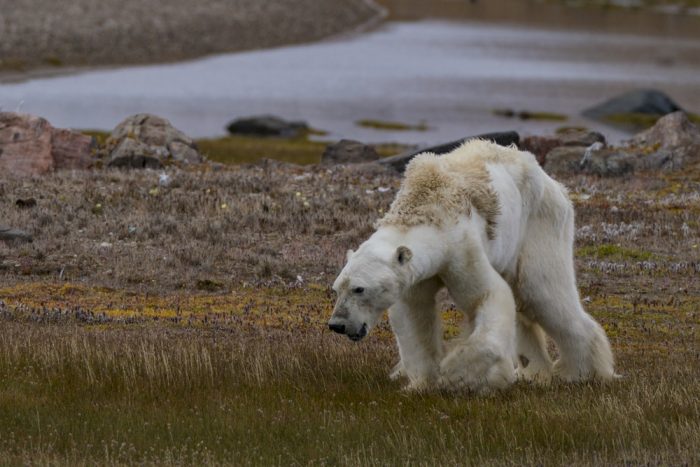 By Cristina Mittermeier and Paul Nicklen.

“Video footage captured in Canada’s Arctic has offered a devastating look at the impact climate change is having on polar bears in the region, showing an emaciated bear clinging to life as it scrounged for food on iceless land.

“The scene was recorded by the conservation group Sea Legacy during a late summer expedition in Baffin Island. ‘My entire Sea Legacy team was pushing through their tears and emotions while documenting this dying polar bear,’ photographer Paul Nicklen wrote on social media after publishing the footage this week.

“The video shows the bear struggling to walk as it searches for food. The bear eventually comes across a trashcan used by Inuit fishermen, rummaging through it with little luck. The bear, which was not old, probably died within hours of being captured on video, said Nicklen. ‘This is what starvation looks like. The muscles atrophy. No energy. It’s a slow, painful death.’

“The film-makers drew a direct line between the bear’s state and climate change. ‘As temperatures rise and sea ice melts, polar bears lose access to the main staple of their diets – seals,’ the video noted. ‘Starving, and running out of energy, they are forced to wander into human settlements for any source of food.'”

This story and video by SeaLegacy was picked up by journalists around the world and run uncritically. The Washington Post, National Geographic, the Daily Mail, the Global News (of Canada), Teen Vogue, Business Insider, the Straits Times (of Singapore), and Deutsche Welle. Unfortunately, it is bogus.

“One starving bear is not evidence of climate change, despite gruesome photos.”

By Susan Crockford at her website, Polar Bear Science.
Posted with her generous permission.

We finally have this year’s example of the new fad of claiming every polar bear that died of starvation (or on its way to starving to death) — and caught on film — is a victim of climate change: a young bear on Somerset Island near Baffin Island, Nunavut filmed in August during its last antagonizing hours by members of an activist conservation organization called SeaLegacy.

Here Cristina Mittermeier, co-founder of SeaLegacy, tells CBC Radio why they filmed the incident and released the video (bold emphasis added). She admits to using this poor bear as a serendipitous photo op to illustrate the future fate she imagines for all bears. Bold emphasis added.

“’We hear from scientists that in the next 100 to 150 years, we’re going to lose polar bears,’ Mittermeier said. ‘We wanted the world to see what starvation of a majestic animal like this looks like.’ …

“Though it’s possible that climate change is responsible for the bear’s sickly appearance, some caution that it may be premature to jump to that conclusion based on a video. ‘It is impossible to tell why he was in this state. Maybe it could’ve been because of an injury or disease,’ Mittermeier said.

“But Ian Stirling from the University of Alberta told the U.K.’s Metro News that a bear like this could be sick or simply old. ‘A difficulty hunting could be involved. I don’t think you can tie that one to starvation because of lack of sea ice,’ he continued.

“While Mittermeier said the bear had no obvious injuries and she believes it was too young to die of old age, she contends that’s irrelevant. ‘The point is that it was starving, and …as we lose sea ice in the Arctic, polar bears will starve.'”

This may be how you get gullible people to donate money to a cause but it isn’t science. {As Dr. Stirling said} there is no evidence that this starving bear was a “victim” of sea ice loss caused by global warming.

In August, this bear would have been only recently off the sea ice: since most bears are at their fattest at this time of year, something unusual had to have affected his ability to hunt or feed on the kills he made when other bears around him did not starve and die. It could have been something as simple as being out-competed for food in the spring by older animals.

But if sea ice loss due to man-made global warming had been the culprit, this bear would not have been the only one starving: the landscape would have been littered with carcasses. This was one bear dying a gruesome death as happens in the wild all the time (there is no suggestion that a necropsy was done to determine cause of death, just as with Stirling’s bear that supposedly died of climate change.)

In fact, research done by polar bear specialists that work in the field shows that the most common natural cause of death for polar bears is starvation, resulting from one cause or another (too young, too old, injured, sick). From Amstrup in Wild Mammals of North America: Biology, Management, and Conservation

“Starvation of independent young as well as very old animals must account for much of the natural mortality among polar bears… Also, age structure data show that subadults aged 2-5 years survive at lower rates than adults (Amstrup 1995), probably because they are still learning hunting and survival skills. …

“I once observed a 3-year-old subadult that weighed only 70 kg in November. This was near the end of the autumn period in which Beaufort Sea bears reach their peak weights (Durner and Amstrup 1996), and his cohorts at that time weighed in excess of 200 kg. This young animal apparently had not learned the skills needed to survive and was starving to death.”

But as Mittermeier has made clear, facts don’t matter in cases like this Somerset Island bear’s death: it’s all about the message.

I’ve asked this question before because it speaks to the present political climate: where were the appeals to help the many starving polar bears back in the spring of 1974 when females with newborn cubs were starving in the Eastern Beaufort Sea because the thick spring ice drove ringed seals away before they gave birth (Stirling 2002)?

“…in the spring of 1974, when ringed seal pups first became scarce, we capture two very thin lone adult female polar bears that had nursed recently, from which we deduced they had already lost their litters. A third emaciated female was accompanied by two cubs which were so thin that one could barely walk. We have not seen females with cubs in this condition in the Beaufort Sea, or elsewhere in the Arctic, before or since.”

What Stirling and Lunn witnessed and documented is scientific evidence that natural variation in spring sea ice can have devastating effects on polar bears, including mass mortality events (Crockford 2017). However, we have not seen any similar mass starvation events that have been conclusively shown to be caused by low summer sea ice.

One starving bear is not scientific evidence that man-made global warming has already negatively affected polar bears, but it is evidence that some activists will use any ploy to advance their agenda and increase donations.

A photographer talks about polar bears.

In an interview yesterday, published in the Victoria Times-Colonist (my home town), photographer Nicklen stated…

“Nicklen is careful about drawing conclusions from his pictures, noting that many people look to poke holes in what’s being said about things like the disappearance of sea ice from the North. …’Ice is melting earlier every spring and freezing later every fall,’ Nicklen said. ‘Bears are designed to go as much as two months without ice, but they are not designed to go four or five months without ice. “Well, this [the video] is what it actually looks like when polar bears are stranded on land.'” 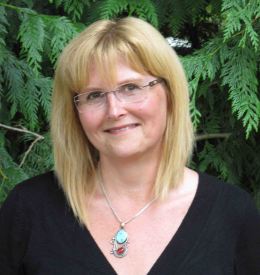 Susan Crockford is a zoologist with more than 35 years of experience, including published work on the Holocene history of Arctic animals. She is an adjunct professor at the University of Victoria, British Columbia (a “non-remunerated professional zooarcheologist associate”) and co-owner of a private consulting company, Pacific Identifications Inc.

Her paper describing her theory about polar bears is “Testing the hypothesis that routine sea ice coverage of 3-5 mkm2 results in a greater than 30% decline in population size of polar bears (Ursus maritimus)”, posted at Peer J Preprints (not peer reviewed). See her publications here and her website Polar Bear Science.

She has written a book about her work: Polar Bears: Outstanding Survivors of Climate Change

(review here), and a novel, Eaten