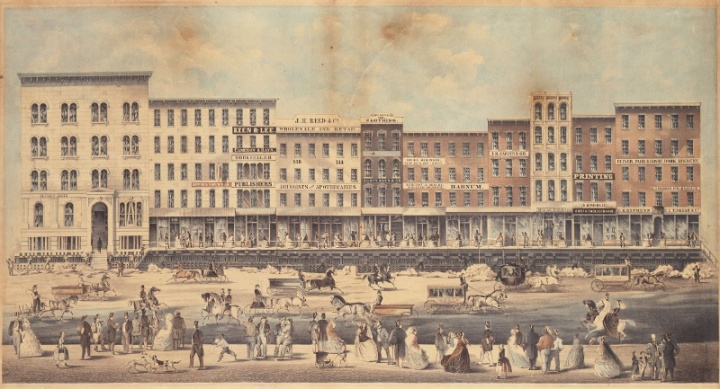 In the 1800s the City of Chicago had a problem. The city rests on low lying marshlands, on the shore of Lake Michigan. Floods were frequent, mud was everywhere, and poor sanitation created ideal conditions for frequent lethal cholera epidemics.

According to the Chicago Tribune;

As Chicago boomed in the 1850s, growing into a major lake port and industrial center, mud became a major problem. The lakeshore marsh on which the city was being built seemed bottomless. A popular story of the time had it that a passerby came upon a man whose head and shoulders protruded from the muck in the middle of the street. “Can I help?” asked the passerby. “No, thank you,” replied the man. “I have a fine horse under me.”

The situation was deadly. The muddy, waterlogged conditions were a perfect breeding ground for cholera. The Chicago Tribune reports that in 1854, a cholera epidemic killed 5% of the population.

A solution had to be found. A sanitation system would mitigate the cholera problem – but much of the city was within 3-4 ft of the waterline of Lake Michigan. The sanitation pipes would not have enough of a downhill gradient to carry the waste away.

So the city fathers embarked on a project of breathtaking engineering ambition. They decided to lift the low lying areas of the city up to 14ft out of the mud, to give the sanitation pipes the downhill gradient they needed to function, and to protect the city from flooding.

Over a period of almost two decades, Chicago’s buildings were jacked up 4 to 14 feet, higher foundations were built beneath them, the storm sewers were placed on top of the streets, and the streets were then filled up to the level of the front doors of the raised buildings. To raise larger buildings, an enterprising newcomer to the city named George Pullman perfected a method involving hundreds of men turning thousands of large jackscrews at the same time. Many smaller structures, especially houses, were simply moved to new locations. “Never a day passed,” noted a visitor at the time, “that I did not meet one or more houses shifting their quarters. One day I met nine.”

Next time someone tells you that a sea level rise of a few ft might force us to abandon coastal cities, tell them about the raising of Chicago. Even if the worst fears of climate alarmists were realised, which seems a deeply unlikely prospect, it is inconceivable that we couldn’t do today, what the American people using 1850s technology achieved, while working on a foundation of muddy marshland.