From the University of California at Santa Barbara -By Julie Cohen |

Most of North America’s megafauna — mastodons, short-faced bears, giant ground sloths, saber-toothed cats and American camels and horses — disappeared close to 13,000 years ago at the end of the Pleistocene period. The cause of this massive extinction has long been debated by scientists who, until recently, could only speculate as to why. 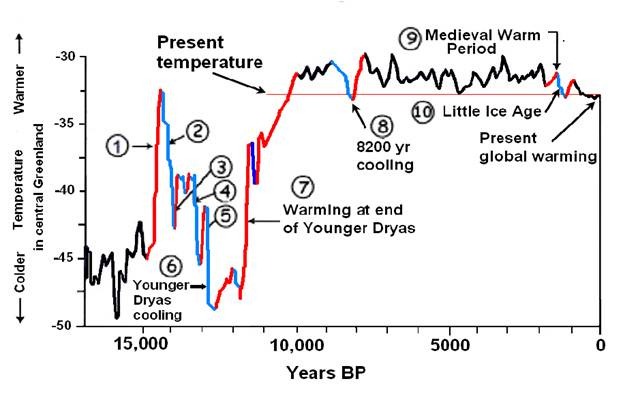 A group of scientists, including UC Santa Barbara’s James Kennett, professor emeritus in the Department of Earth Science, posited that a comet collision with Earth played a major role in the extinction. Their hypothesis suggests that a cosmic-impact event precipitated the Younger Dryas period of global cooling close to 12,800 years ago. This cosmic impact caused abrupt environmental stress and degradation that contributed to the extinction of most large animal species then inhabiting the Americas. According to Kennett, the catastrophic impact and the subsequent climate change also led to the disappearance of the prehistoric Clovis culture, known for its big game hunting, and to human population decline.

In a new study published this week in the Journal of Geology, Kennett and an international group of scientists have focused on the character and distribution of nanodiamonds, one type of material produced during such an extraterrestrial collision. The researchers found an abundance of these tiny diamonds distributed over 50 million square kilometers across the Northern Hemisphere at the Younger Dryas boundary (YDB). This thin, carbon-rich layer is often visible as a thin black line a few meters below the surface.

Kennett and investigators from 21 universities in six countries investigated nanodiamonds at 32 sites in 11 countries across North America, Europe and the Middle East. Two of the sites are just across the Santa Barbara Channel from UCSB: one at Arlington Canyon on Santa Rosa Island, the other at Daisy Cave on San Miguel Island.

“We conclusively have identified a thin layer over three continents, particularly in North America and Western Europe, that contain a rich assemblage of nanodiamonds, the production of which can be explained only by cosmic impact,” Kennett said. “We have also found YDB glassy and metallic materials formed at temperatures in excess of 2200 degrees Celsius, which could not have resulted from wildfires, volcanism or meteoritic flux, but only from cosmic impact.” 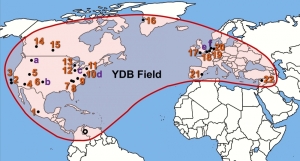 The team found that the YDB layer also contained larger than normal amounts of cosmic impact spherules, high-temperature melt-glass, grapelike soot clusters, charcoal, carbon spherules, osmium, platinum and other materials. But in this paper the researchers focused their multi-analytical approach exclusively on nanodiamonds, which were found in several forms, including cubic (the form of diamonds used in jewelry) and hexagonal crystals.

“Different types of diamonds are found in the YDB assemblages because they are produced as a result of large variations in temperature, pressure and oxygen levels associated with the chaos of an impact,” Kennett explained. “These are exotic conditions that came together to produce the diamonds from terrestrial carbon; the diamonds did not arrive with the incoming meteorite or comet.”

Based on multiple analytical procedures, the researchers determined that the majority of the materials in the YDB samples are nanodiamonds and not some other kinds of minerals. The analysis showed that the nanodiamonds consistently occur in the YDB layer over broad areas.

“There is no known limit to the YDB strewnfield which currently covers more than 10 percent of the planet, indicating that the YDB event was a major cosmic impact,” Kennett said. “The nanodiamond datum recognized in this study gives scientists a snapshot of a moment in time called an isochron.”

To date, scientists know of only two layers in which more than one identification of nanodiamonds has been found: the YDB 12,800 years ago and the well-known Cretaceous-Tertiary boundary 65 million years ago, which is marked by the mass extinction of the dinosaurs, ammonites and many other groups.

“The evidence we present settles the debate about the existence of abundant YDB nanodiamonds,” Kennett said. “Our hypothesis challenges some existing paradigms within several disciplines, including impact dynamics, archaeology, paleontology and paleoceanography/paleoclimatology, all affected by this relatively recent cosmic impact.”