From the told ya so department, comes this recently presented paper at the European Geosciences Union meeting.

Authors Steirou and Koutsoyiannis, after taking homogenization errors into account find global warming over the past century was only about one-half [0.42°C] of that claimed by the IPCC [0.7-0.8°C]. 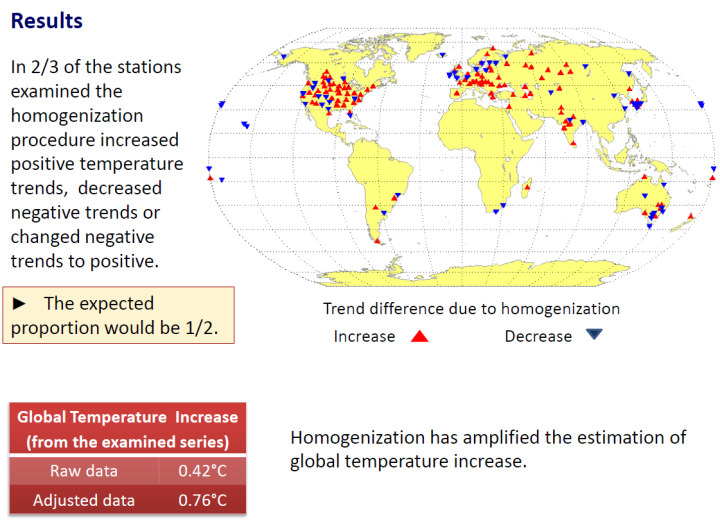 Here’s the part I really like:  of 67% of the weather stations examined, questionable adjustments were made to raw data that resulted in:

“homogenation practices used until today are mainly statistical, not well justified by experiments, and are rarely supported by metadata. It can be argued that they often lead to false results: natural features of hydroclimatic times series are regarded as errors and are adjusted.”

The paper abstract and my helpful visualization on homogenization of data follows:

We investigate the methods used for the adjustment of inhomogeneities of temperature time series covering the last 100 years. Based on a systematic study of scientific literature, we classify and evaluate the observed inhomogeneities in historical and modern time series, as well as their adjustment methods. It turns out that these methods are mainly statistical, not well justified by experiments and are rarely supported by metadata. In many of the cases studied the proposed corrections are not even statistically significant.
From the global database GHCN-Monthly Version 2, we examine all stations containing both raw and adjusted data that satisfy certain criteria of continuity and distribution over the globe. In the United States of America, because of the large number of available stations, stations were chosen after a suitable sampling. In total we analyzed 181 stations globally. For these stations we calculated the differences between the adjusted and non-adjusted linear 100-year trends. It was found that in the two thirds of the cases, the homogenization procedure increased the positive or decreased the negative temperature trends.

One of the most common homogenization methods, ‘SNHT for single shifts’, was applied to synthetic time series with selected statistical characteristics, occasionally with offsets. The method was satisfactory when applied to independent data normally distributed, but not in data with long-term persistence.

The above results cast some doubts in the use of homogenization procedures and tend to indicate that the global temperature increase during the last century is between 0.4°C and 0.7°C, where these two values are the estimates derived from raw and adjusted data, respectively.

2. Homogenization practices used until today are mainly statistical, not well
justified by experiments and are rarely supported by metadata. It can be
argued that they often lead to false results: natural features of hydroclimatic
time series are regarded errors and are adjusted.

3. While homogenization is expected to increase or decrease the existing
multiyear trends in equal proportions, the fact is that in 2/3 of the cases the
trends increased after homogenization.

4. The above results cast some doubts in the use of homogenization procedures
and tend to indicate that the global temperature increase during the
last century is smaller than 0.7-0.8°C.

5. A new approach of the homogenization procedure is needed, based on
experiments, metadata and better comprehension of the stochastic
characteristics of hydroclimatic time series.

h/t to “The Hockey Schtick” and Indur Goklany

UPDATE: The uncredited source of this on the Hockey Schtick was actually Marcel Crok’s blog here: Koutsoyiannis: temperature rise probably smaller than 0.8°C

Here’s a way to visualize the homogenization process. Think of it like measuring water pollution. Here’s a simple visual table of CRN station quality ratings and what they might look like as water pollution turbidity levels, rated as 1 to 5 from best to worst turbidity:

In homogenization the data is weighted against the nearby neighbors within a radius. And so a station might start out as a “1” data wise, might end up getting polluted with the data of nearby stations and end up as a new value, say weighted at “2.5”. Even single stations can affect many other stations in the GISS and NOAA data homogenization methods carried out on US surface temperature data here and here. 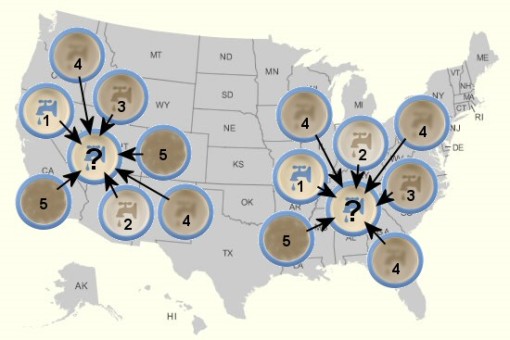 In the map above, applying a homogenization smoothing, weighting stations by distance nearby the stations with question marks, what would you imagine the values (of turbidity) of them would be? And, how close would these two values be for the east coast station in question and the west coast station in question? Each would be closer to a smoothed center average value based on the neighboring stations.

Finally, when reference information from nearby stations was used, artifacts at neighbor stations tend to cause adjustment errors: the “bad neighbor” problem. In this case, after adjustment, climate signals became more similar at nearby stations even when the average bias over the whole network was not reduced.