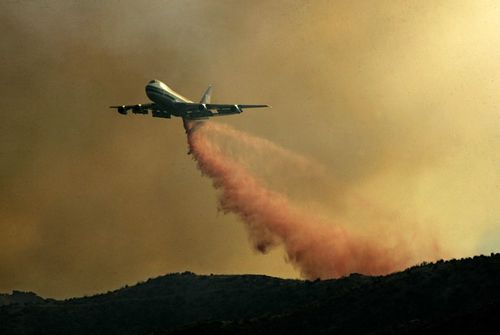 AP labels the 2012 Colorado wildfires worst in state history in this story.

My friend and fellow climate skeptic, nationally syndicated radio host Lars Larson, asks some pointed and pertinent questions about what appears to be some of the most idiotic policy ever devised by government. Since we’ve been covering some of the folly of trying to link the fire to global warming, I thought this government folly with trying to put it out would go along with the issues discussed here. – Anthony

He writes in an email to me from Friday:

I have new questions rolling around in my head every day but there are at least four things I know for sure this morning.  This year the U.S. Forest Aervice will spend north of a billion dollars fighting forest fires across America.  Billions of dollars worth of trees owned by the American people will go up in flames.  And a $50 million dollar airplane that could put those fires out faster sits on the ground in Arizona because the U.S. Forest Service refuses to hire Evergreen Aviation.  Now you may be saying, “There must be a good reason”.  That’s what I thought, but then I remembered that government is capable of multibillion dollar stupidity on a daily basis.  The Forest Service offers no explanation whatsoever.

And evergreen aviation points out that their 747 supertanker fire fighting plane has been hired by Mexico and Israel to fight fires and earned high marks.  It drops ten times as much water as the biggest forest service tanker in use…and does it at half the cost per gallon.  It’s big enough and fast enough to cover fires anywhere in America…and the forest service refuses to use it…and it’s your forests that are going up in flames.

Today’s statement from Evergreen Aviation about why the U.S. Forest service refuses to use its 747 flying supertanker firefighting plane.

We felt compelled to release this statement due to the overwhelming amount of calls we have received concerning the availability of the Evergreen Supertanker. We at Evergreen are saddened by the fire devastation now taking place in many Western US states. For over 60 years, we have supported the US Forest Service in its important mission to battle and control fires, and it is our desire to continue this rich history of service. While our helicopters continue to work fires for the State of Alaska under State contracts, unfortunately, our Boeing 747 Supertanker Very Large Air Tanker (VLAT) aircraft awaits activation with the US Forest Service.

We have never been told why we have not been activated by the US Forest Service, so we can only speculate as to why we face this outcome:

1. We were offered a Call-When-Needed (CWN) contract a few years ago by the US Forest
Service (proving our technical viability), but we were never called into action resulting in
a multi-million dollar loss to our company as we were required to maintain and have
flight crew available should we be called. The only contract that will sustain a VLAT
program is an Exclusive-Use contract, which provides an income stream to sustain the
program even if the asset is not utilized. We invested over $50M to develop this asset in
the firm belief that we could better control fires as we proved in Israel and Mexico under
CWN contracts that we could afford to offer at the time.

2. There have been recent changes to the US Forest Service procurement policies. Today,
only small businesses are eligible for contract awards concerning air tanker assets;
Evergreen is not a small business and, therefore, is excluded from consideration for any
award.

3. The US Forest Service’s specification for Next Generation Air Tanker aircraft limits tank
size to 5,000 gallons. The Supertanker’s tanks hold about 20,000 gallons, which is
considered outside the USFS specification. The USFS just awarded contracts to four
small businesses with aircraft equipped with these smaller tanks, and excluded the
Evergreen Supertanker. Since World War II, tank capacities have been in the 3,000 to
5,000 gallon range, yet we continue to face the growing threat from mega fires today. We
believe the Supertanker represents an overwhelming response to this growing threat.

Please contact your state representatives in Washington DC to demand an examination of their current procurement policies concerning VLAT aircraft. The US Forest Service says it best: “Only YOU can prevent wildfires.”

Here are videos of tanker that could be fighting fires in Colorado and elsewhere…that have killed Americans, burned houses, destroyed public property and timber

167 thoughts on “In Colorado wildfires, ‘worst in state history’, why won’t the Forest Service use the biggest firefighting tool available?”