The carbon dioxide data from Mauna Loa is widely recognized to be extremely regular and possibly exponential in nature. If it is exponential, we can learn about when it may have started “taking off” from a constant pre-Industrial Revolution background, and can also predict its future behavior. There may also be information in the residuals—are there any cyclic or other variations that can be related to known climatic oscillations like El Niños?

I am sure others have fitted a model to it, but I thought I would do my own fit. Using the latest NOAA monthly seasonally adjusted CO2 dataset running from March 1958 to May 2012 (646 months) I tried fitting a quadratic and an exponential to the data. The quadratic fit gave a slightly better average error (0.46 ppm compared to 0.57 ppm). On the other hand, the exponential fit gave parameters that have more understandable interpretations. Figures 1 and 2 show the quadratic and exponential fits.

From the exponential fit, we see that the “start year” for the exponential was 1958-235 = 1723, and that in and before that year the predicted CO2 level was 260 ppm. These values are not far off the estimated level of 280 ppm up until the Industrial Revolution. It might be noted that Newcomen invented his steam engine in 1712, although the start of the Industrial Revolution is generally considered to be later in the century. The e-folding time (for the incremental CO2 levels > 260 ppm) is 59 years, or a half-life of 59 ln 2 = 41 years. 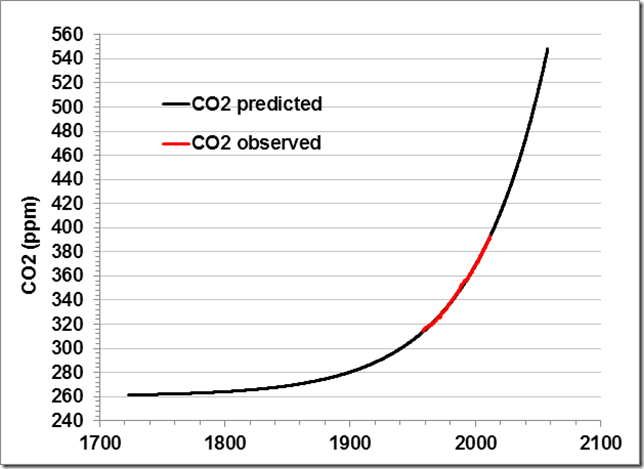 The departures from the model are interesting in themselves. The residuals from both the quadratic and exponential fits are shown in Figure 4. 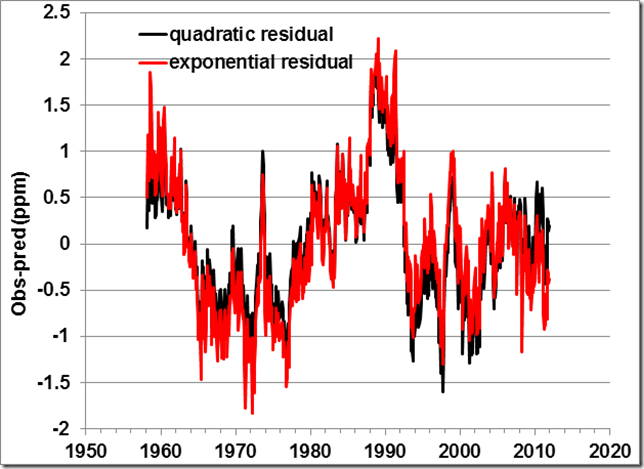 Figure 4. Residuals from the quadratic and exponential fits.

Both fits show similar cyclic behavior, with the CO2 levels higher than predicted from about 1958-62 and also 1978-92. More rapid oscillations with smaller amplitudes occur after 2002. There are sharp peaks in 1973 and 1998 (the latter coinciding with the super El Niño.) Whether the oil crisis of 1973 has anything to do with this I can’t say. For persons who know more than I about decadal oscillations these results may be of interest.

The data were taken from the NOAA site at ftp://ftp.cmdl.noaa.gov/ccg/co2/trends/co2_mm_mlo.txt

The nonlinear fits were done using Excel Solver and placing no restrictions on the 3 parameters in each model.

341 thoughts on “What can we learn from the Mauna Loa CO2 curve?”