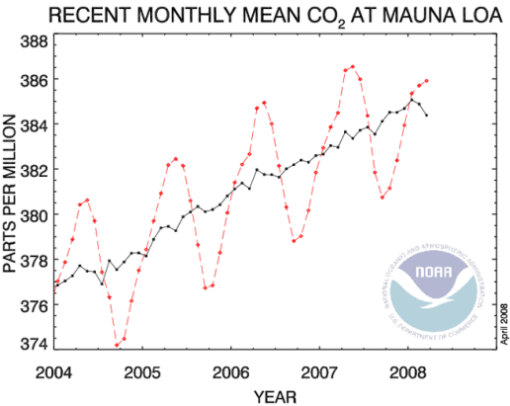 In the graph above, the black line is the seasonally adjusted value while the red is the monthly mean. This is based on data through March. May is normally the peak month. Here we see how Mauna Loa CO2 has lagged in its annual rise. The likely culprit: Pacific ocean cooling due to La Nina and increased solubility of CO2 in water.

This graph certainly supports the notion of the ocean’s importance in CO2 trends, something Roy Spencer did a guest post on CO2 and oceans here on this blog and was roundly criticized for it in some circles.

Given that May is normally the peak month for CO2, and because we still see a strong La Nina, the result could be a lower CO2 max in 2008 than 2007 for Mauna Loa. This has happened before in the 60s and 70s in the last cool PDO phase (lasting til 1977). Even if it stays even with last year’s level, this tells us a lot and sheds doubt on these ideas:

1. Anthropogenic accumulation (civilization is still producing CO2)
2. A CO2 residence time of several hundred years seems unlikely now
3. Giegengack’s thesis that if man stopped emitting CO2, the earth would emit more to compensate, the premise being that since man has for the first time “upset the balance” and is pressing CO2 into the earth, then once the balance is restored the earth will resume emitting it instead.

The global data plot below doesn’t show the same trend as Mauna Loa, so it appears that this CO2 dropoff at Mauna Loa is a regional effect due to Hawaii’s proximity to cooler ocean temperatures. 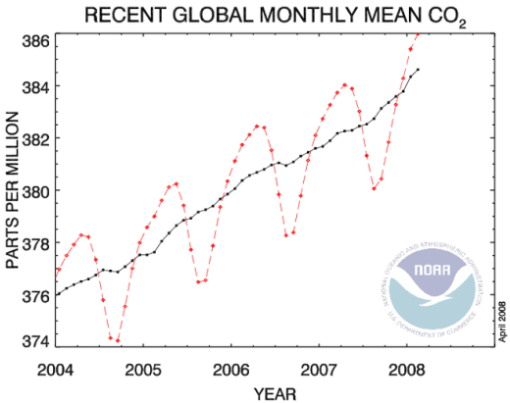 It will be interesting to see in the coming months what happens globally, should we see a drop-off or leveling of global CO2 in response to our quiet sun and La Nina, it will be difficult for AGW proponents to explain. Nature will indeed be the final arbiter of this debate.

We live in interesting times. Hat tips to Joe D’Aleo and Alan Siddon for portions of this post.

UPDATE: Lucia at the Blackboard has posted an interesting rebuttal to criticisms of this simple presentation above. It is worth a read.